The B.C. government recently announced the creation of a new wildlife management area in the South Okanagan to protect wildlife habitat. The McTaggart-Cowan Wildlife Management Area encompassed 6,500-hectares on the east side of Skaha Lake and borders Skaha Bluffs Provincial Park. While most of the area is Crown land, a 116-hectare portion has been leased to the B.C. government at no charge by the Nature Trust of B.C. The property is “one of the last remaining low elevation grasslands benches on the east side of Skaha Lake and it secures a contiguous corridor of bighorn sheep habitat from lakeshore to high elevation,” states Nature Trust CEO Jasper Lament.

Steve Thomson, minister of forests, lands and natural resource operations, said the new WMA designation gives government staff additional tools to look after wildlife. The minister noted the plan was broadly supported during the consultation process. “I think everybody recognized this is an important step, an important thing to do,” Thomson said.

The new WMA includes a trail that winds along the Skaha Bluffs and was used historically by First Nations. Penticton Indian Band Chief Jonathan Kruger said it was an honour to work with the province to help create the new designated area. “We’re coming together in a good way where we’re actually talking about the land together,” Kruger said.

The new WMA was named for the late Ian McTaggart-Cowan, a noted B.C. conservationist and one of the founding directors of the Nature Trust of BC, which acquires ecologically sensitive land that it can then protect. 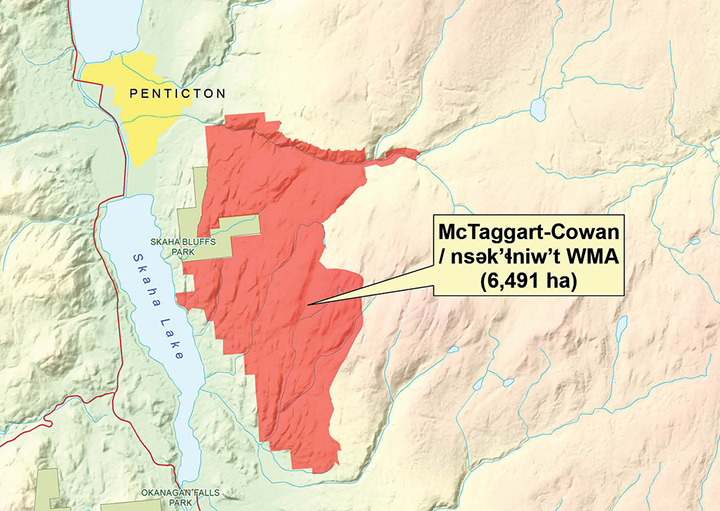