The Osoyoos Indian Band, (NK’MIP), was formed on November 21, 1877. As part of the Okanagan Nation, we are a strong, independent and proud people with a rich heritage. The Osoyoos Indian Band has always been progressive. From the early years of ranching, trading and small farms the people have continued to change with the times. Now, huge vineyards sprawl across these lands, businesses are being invited to call this home and the people have become business oriented. The Band manages businesses with annual budgets in excess of $l4 million dollars and administers its own health, social, educational and municipal services. The Osoyoos Indian Band Membership is approximately 400, with the majority of the Band Members living on the Osoyoos Indian Reservation. Improvements and modernization are everywhere. During recent years new home construction on the reserve has been swift with growth matching the rest of the South Okanagan each year. 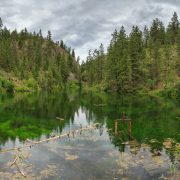 SOSCP is Hiring - Land Use Biologist