In 2012 and 2013, BC Frogwatch received unconfirmed reports of invasive American Bullfrogs near Penticton and Summerland. This introduced species has not previously been reported in this area.

Okanagan Similkameen Stewardship is seeking people to become volunteer citizen scientists to help monitor for bullfrogs over the next two weeks. Volunteers can participate in daytime or nighttime pond searches being conducted in July. Those wishing to attend, volunteer, or report a bullfrog sighting should contact Alyson Skinner at 250-809-1980 or alysonskinner@gmail.com. 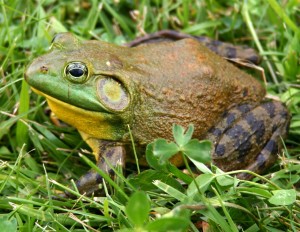 Bullfrogs were introduced in the Okanagan in the 1950s close to the Canada-US border. Since 2004, researchers, private landowners, conservation organizations, and government collaborated in bullfrog removal efforts in the south Okanagan. Removal efforts have drastically reduced bullfrog occurrence near the Canada-US border; however, a handful of bullfrogs can colonize a new area within one or two breeding seasons. Detecting all individuals is essential in preventing the spread of this species.

Introduced bullfrogs pose a great threat to native Okanagan amphibians. Bullfrogs are voracious predators of native fish, frogs and salamanders. They also reproduce rapidly by laying thousands of eggs, outcompete other animals for food, and spread disease to native amphibians. Many native amphibians are at risk due to human influences such as habitat loss, road mortality, and pollution. Removing the added threat of bullfrogs is vital to the survival of native amphibians. Bullfrogs live in year-round ponds and take up to two seasons to mature into adults. Other species which live in permanent ponds, such as the endangered Blotched Tiger Salamander, are at particular risk.

A mature American Bullfrog is the size of a dinner plate and is olive-yellow with a grey belly. Males have bright yellow throats during mating season. A prominent tympanic ear membrane is visible. Adult males have a distinctive loud call that can be heard during the spring and summer.

Visit www.OkanaganSimilkameenStewardship.ca for more information on this initiative.